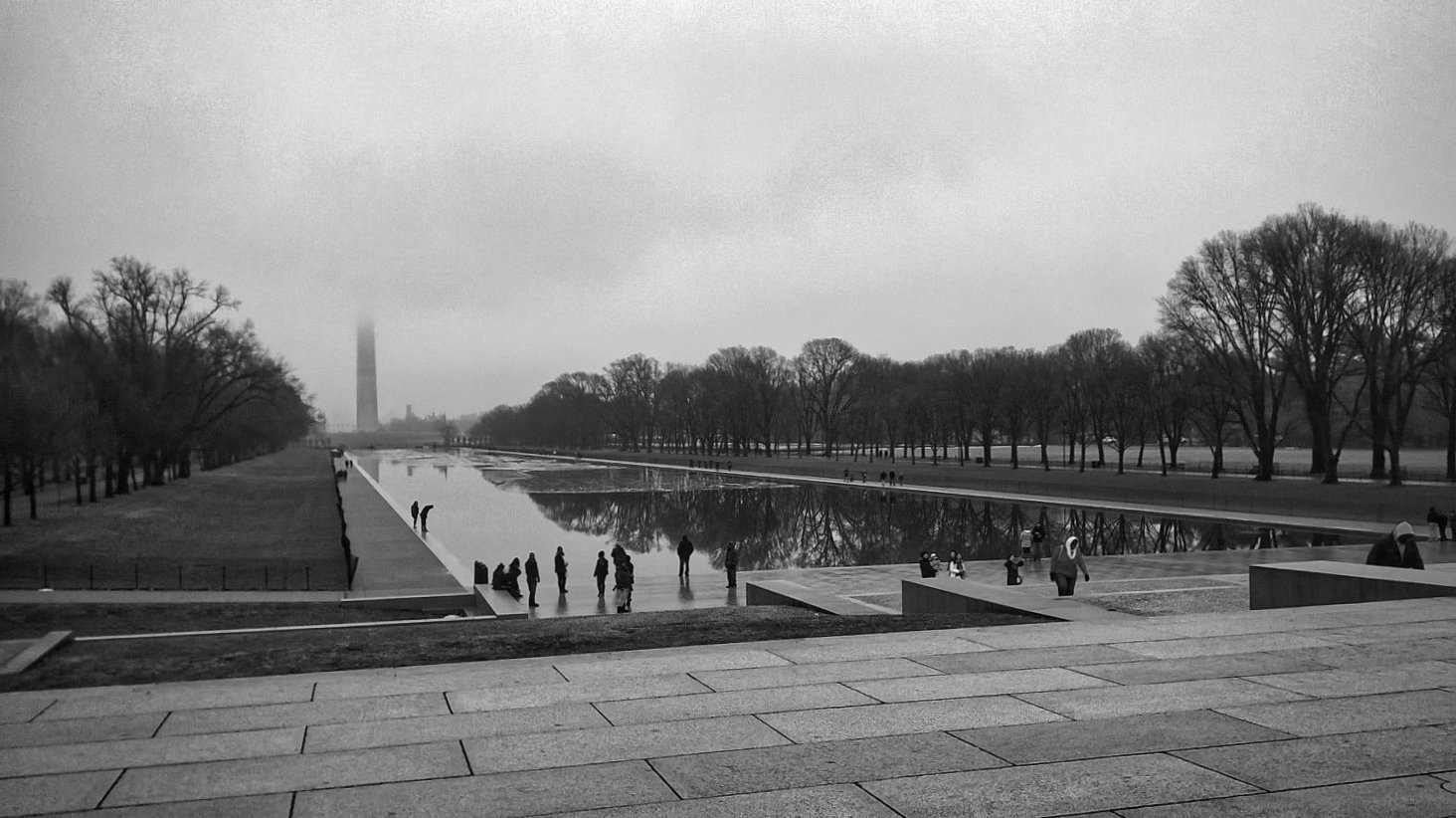 The Martin Luther King, Jr., holiday is an official day of service and celebrates the civil rights leader’s life and legacy. Signed into law by President Ronald Reagan in 1983, it wasn’t until 2000 that all 50 states observed it as a state holiday. On August 23, 1994, President Clinton signed the Martin Luther King Jr. Federal Holiday and Service Act (108 Stat. 1565), expanding the mission of the holiday as a day of community service, interracial cooperation and youth anti-violence initiatives. Remember when the leaders of our country focused on bringing our communities together? Hold that thought for another day…

I am posting this photo again due to the significance of where it was taken and the message that it conveys to me. My thoughts on that later, but look at the picture closely and think about what it says to you (other than, “why is Maxwell standing there in the cold? He’s nuts”). The photo was taken on January 15, 2015, which was a cold and foggy winter day. The clouds were low enough to conceal the top half of the Washington Monument and there was little foot traffic around the Reflecting Pool. I was standing near the marker where Dr. King gave his famous speech. It says:

“I HAVE A DREAM
MARTIN LUTHER KING, JR.
THE MARCH ON WASHINGTON
FOR JOBS AND FREEDOM
AUGUST 28, 1963″

History tells us that the march was specifically organized to pressure lawmakers to pass civil rights and voting rights legislation; the Civil Rights Act of 1964 and the Voting Rights Act of 1965. Standing there, you can almost feel the presence of Dr. King. You can look out and see what he saw in front of him. For a brief moment, you might even feel hopeful.

Symbolism is a powerful motivator. We use it in the creation of seals, logos and trademarks. Symbolism can convey a message, it can create expectations and evoke emotions, both good and bad. In government, we always went for the eagle, stars, swords and other images of power. I always took exception with the eagle because, as Ben Franklin once wrote to his daughter, “He is a Bird of bad moral Character. He does not get his Living honestly….too lazy to fish for himself…he is a rank coward…” But still, we always included the eagle, our national bird, as well as other symbols of force. We wanted our symbols to be intimidating, reflect toughness and power. However, if I were given my preference, I would lean on the side of using the beehive (hard work), the owl (wisdom), the Liberty Bell (freedom) or clasped hands shaking (cooperation). But I digress…

Today, two states are celebrating “King-Lee Day”. The intent is to glorify the existence of the Confederacy. Even in 2023, the work of Dr. King, Malcolm X, John Lewis and many others, is still intentionally eclipsed by the fog of hatred, greed, power and resentment. Like Dr. King, I prefer to think that those that espouse such views are not inherently evil, but rather that they have fallen victim to evil. Dr. King once said “Racism is total estrangement. It separates not only bodies, but minds and spirits.”

In my photo, you will notice the monument has been partially eclipsed by fog. To me, this reflects how our country has not fully realized the dream of Martin Luther King, Jr. Many of those unrealized dreams remain obscured in the heavens, alongside a creator that inspired them. Those dreams may appear out of reach, but they remain obtainable with some effort. The strength of the monument comes from the totality of its height and uniformity. Native American tribes, professional organizations, societies, businesses, and foreign nations donated stones used to build the monument, reflecting a masonry tapestry of our collective American experience. But as the fog remains, that strength is diminished.

This is what I see in my photo. I am prayerfully waiting for the fog to be over.

“And when the fog’s over and the stars and the moon come out at night it’ll be a beautiful sight.”